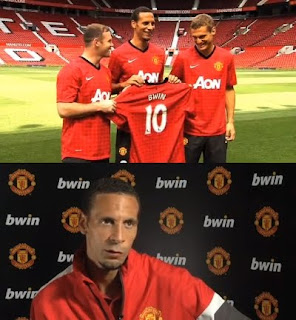 Bwin said the deal would also give it the chance to exploit the club’s international appeal to expand in social gaming – free-to-use web games played against other users that offer additional features paid for with online credits.

“Man Utd has 569 million followers outside of Europe, providing us with a great opportunity to offer jointly designed and innovative products in countries that do not yet allow real money online sports betting,” said bwin.party’s co-CEO Norbert Teufelberger.

Bwin, which is already the shirt sponsor of Spanish football club Real Madrid, said football remained key to its long-term future, making up about half of its sports betting revenue in 2011.

Man Utd, which debuted on the New York stock exchange last week, has a series of commercial linkups, including with insurance broker AON, whose name is currently emblazoned on its shirts, set to be replaced on the famous red jerseys by GM’s Chevrolet in 2014.

Media Man Entertainment
Posted by Media Man at 8:08 AM