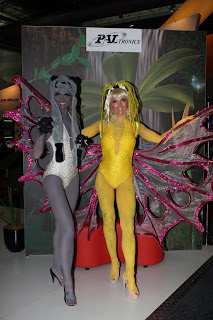 Today was the 2nd day for the most high profile and successful gaming expo in Australia - the Australasian Gaming Expo, which is being hosted by the Sydney Convention Centre at Darling Harbour.

It's a key time for the gaming industry in Australia with all the regulation elements, responsible gambling initiatives and such, and most of the big boys of the industry were on hand to show off their wares, with some exhibitors demonstrating significant creative flair to help showoff their latest and greatest wares.

Our friends at Human Statue Bodyart had a couple of body models made up in bodypaint (Anastasia as a butterfly and Victoria as a panda) - complete with wings, for leading gaming brand Paltronics and its latest game 'Jungle Madness'.

The expo centre itself is huge - 15,000 square metres (about the size of an Aussie Rules football oval) and this provided more than ample opportunity for over 750 slot games aka "pokies" to strut their stuff.

The Australasian Gaming Expo is by far the largest event of its type in Australia and one of the world’s biggest.

We learned through the grapevine that a trip for 2 to Las Vegas will be won by a lucky visitor on each of the 3 days of the Expo, and this is compliments of the Gaming Technologies Association which owns the event.

We understand that over 16,000 people have walked through the games thus far, with those in the business being the majority, and no doubt a few punters, checked through the gates (but note that the games on display do not accept coins or notes).

Gaming firm Paltronics was once again looking for their fair share of attention by having a few body models made up in forest like bodypaint attire to compliment their selection of games, including the very popular 'Jungle Madness'.

There's little doubt that folks Paltronics knew that competitors of sorts, IGT, were going all out with an Elvis promotion (including imitator), and may have also noted their 'Sex In The City' promotional stand from last years show.

It's always good to see Australian companies such as Paltronics take on international giants such as IGT and promotional models are just one of the weapons that gaming companies will continue to employ in the high stakes world of electronic gaming, and the folks from the Human Statue Bodyart creative arts agency certainly helped Paltronics make a positive splash today.