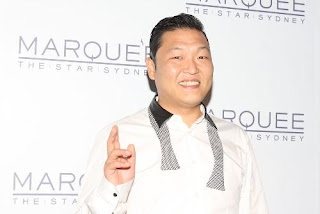 It was obvious one or two VIP's and high rollers were in town, with police having a strong presence in and around the one time casino - now more an intergrated entertainment and gaming hub, complete with nightclubs and entertainment attractions a plenty.

The only thing - person Marquee Sydney and The Star was missing was Psy, and now that's complete how will they top that! We hear maybe with KISS, The Rolling Stones and / or Blondie and Pink, but that's just rumour at this stage... but do expect at least one of those big time acts to follow in Psy's footsteps.

The music video for "Gangnam Style" is the most viewed K-pop video on YouTube, and also the most "liked" video on the site. Published on July 15, 2012, the video has over 480 million views, and more than 4.1 million "likes." Psy has appeared on numerous television programs, including The Ellen DeGeneres Show, Extra, Good Sunday: X-Man, The Golden Fishery, The Today Show, Saturday Night Live and Sunrise.

Stay tuned and don't change your dial for more hot news on Psy and more of the world's top entertainment attractions.

Media Man Entertainment
Posted by Media Man at 1:26 AM