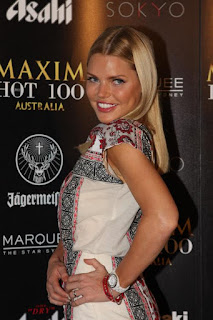 It was obvious to the trained eye that one or two VIP's - high rollers, hot models and blondes a plenty were in town at the one time casino - now more an integrated entertainment and gaming hub, complete with nightclubs and entertainment attractions a plenty. Marquee is positioned as Sydney's hottest nightclub, and so far seems to be living up to the hype. No doubt the likes of The Tele, Casino News Media, Music News Australia, The Shout, Media Man, AAP and The Sydney Morning Herald will be reporting on this one.

Sophie Monk (wearing clothes...as opposed to no clothes like in the mags) was be the special guest at MAXIM Australia’s HOT 100 Halloween Party. Sophie made her only Sydney appearance to celebrate making the top 10 in MAXIM’s inaugural HOT 100 list, in which she is placed at number seven on the list.

Sophie Monk said: "I’d like to thank my mum for voting for me and apologies to my brother who will most likely buy every copy on the Gold Coast so his friends don’t see it," says Sophie. "I love that Australia is celebrating Halloween but I’m not sure how I’m going to make a pumpkin outfit sexy. I will try!"

MAXIM editor-in-chief, Santi Pintado, said this will be the magazine’s biggest party to date. "We’ve had such a fantastic response to the MAXIM Hot 100 Australian Women list, so we needed to make this event even bigger than our previous parties. We’re expecting a big crowd for this one. Should be notoriously epic."

Over 500 VIP guests partied through the night to the razor sharp mix of hip hop, old school RNB and mainstream hits by The Faders (Milly Gattegno & Suhana Lye) who have made a name for themselves bringing the party to the hottest clubs, tours and social events the world has to offer such as Chanel, Nike, Ray Ban, Oakley, Myer, Optus and private parties for Good Charlotte, Wu Tang Clan, Teddy Riley as well as Australia’s hottest festivals Splendour in the Grass, Good Vibrations and Future Music Festival.

Stay tuned and don't change your dial for more hot news on Marquee, Sophie Monk and friends, and many of the world's top and hottest entertainment attractions.