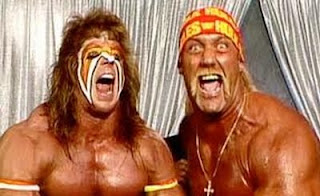 Pro wrestling is different things to different people, but it's widely accepted as one of the most popular forms of entertainment - especially for men and kids.

Every week millions of fans tune into television to watch promotions like the famous WWE and Impact Wrestling.

Pro wrasling may be as American as apple pie, but Australia is one of the world's biggest non U.S fan bases, and we back it up with impressive PPV buy rates via Foxtel as well as weekly top 10 number crunching for programs such as RAW and SmackDown!

There are many elements that make the pseudo sport exciting. The spectacular moves, the amazing bodies, the ring entrances, the storylines, the costumes and face paint. Say what - face paint! Yes, even most casual fans would have heard of the man they call Sting (currently with Impact Wrestling, but featured on the WWE website), Jeff Hardy, The Ultimate Warrior, and let's also include the recently renamed WWE super heel - villain, Lord Tensai (tattoos and bodyart galore). It also appears that current WWE champion Sheamus aka 'The Great White', uses a little white paint or some other substance on his chest area (you need to look closely, but check out the WrestleMania 28 footage and judge for yourself).

We think that Australian pro wrestlers might soon more readily adopt face painting as another way to help stand out from the pack. 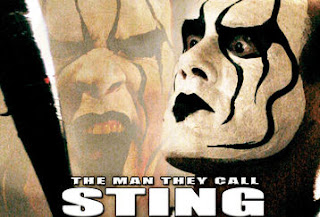 The Man Called Sting. Icon or not, he has an impressive pro wrestling body of work and knows how to work the crowd.

He has the 'It Factor' and is almost as famous for his face paint, as he is his matches with fellow legend Ric Flair.

His red version of the paint during his time in the NWO Wolfpac was something to behold.

He even had previous face paint along the lines of Ultimate Warrior styling when he still had blond hair and more recently at Impact Wrestling with Joker type face paint. No wonder WWE seem to be making a play to sign Sting, or at least to have him officially inducted into the WWE Hall of Fame.

The different changes have lent him to using his face paint as both intimidation and character enhancement. 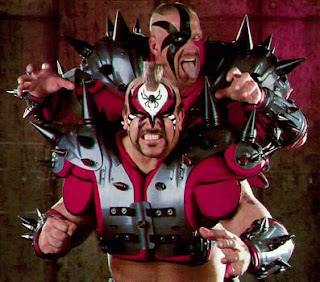 Considered by many as one of the greatest tag teams of all time, if not the greatest, The Road Warriors both had simple but awesome face paint.

Hawk and Animal had their Mad Max-inspired gimmick down to a science, spiked shoulder pads and all.

This face paint seems to be a combination of character inspiration and intimidation. 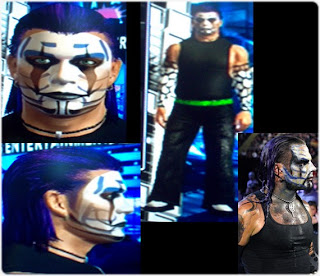 Jeff Hardy aka 'The Charismatic Inigima' might just be the king of the face paint in professional wrestling.

His use of face paint is pure character enhancement, but nobody has ever done it better.

He changes it frequently, and usually it comes up looking amazing. Most hardcore fans will tell you that Hardy's face paint has been better and more creative in Impact Wrestling than in the WWE. Maybe Hardy has more control in his current promotion, which is also a scary thing. Great paint, and well done on cleaning up your act Jeff, if we should believe the press.

The Ultimate Warrior had some of the coolest face paint of all time.

Some have noted a dash of Batman themes in the mix.

Add the paint to the interviews, chiseled body and unique and crazy ring style, and this guy was one of a kind wacko (and successful). Will Triple H bring back the Warrior? Stranger things have happened, and Triple H has hinted via the WWE website and leaked elsewhere that he would be interested in getting a 1-2-3 over Warrior, so stay tuned.

I can remember it like yesterday "I'm Axe and "I'm Smash" and we're going to kick your stinking teeth in". The them went something like "Here comes the Ax and here comes the Smasher. The Demolition is coming to get ya". Red, black and silver have never looked so good (or scary).

Like The Road Warriors, Demolition also employed a Mad Max-inspired theme in their gimmick.

Demolition seemed to use their paint as intimidation and character enhancement.

The KISS Demon was created with a licensing agreement with KISS the band. Supposedly the beginning of a stable that was to include wrestlers modelled after each of the KISS band members. Only The Demon came to pass, and it didn't last. Another WCW idea that went south. I would have trusted my marketing and promotion with KISS top brass Gene Simmons and Paul Stanley more than with the then WCW marketing department. How about you KISS Army fans?


The Powers of Pain (The Warlord and The Barbarian)

The Powers of Pain was a team that consisted of the Warlord and The Barbarian. Managed by Mr. Fuji, who for a few years was one of best managers in my estimation. Their face paint was fairly generic but nevertheless intimidating.

After the team split up, they both stepped away from using facepaint and each gained a new manager—Warlord being paired up with Slick and Barbarian joining Bobby Heenan.

The Missing Link was a character not so unlike to that of George 'The Animal' Steele and Madog Vachon - a crazy man that needed a handler to bring him to the ring and keep him under control.

He would repeatedly smash his own head into turnbuckles during matches and use his head as a weapon (but in reality his forearm appeared to take most of the blow). Kayfabe!

His face paint seemed to be geared more towards furthering his character.

Yoshi wrestled in WWE for some time before debuting the above look.

During a feud with Tyson Kidd, where he was written off of television for a few weeks, Yoshi debuted this look when he returned citing it as a tribute to The Great Muta and his Japanese heritage. You have to long his ring entrance music and video, but his win - loss record is not on par with the rest of his act. Maybe he would have had more impact 10 years ago. Sadly we will never know. Tipped to enter a feud with Lord Tensai at some point, judging by Twitter, or might soon end up being shown the door, thanks to new WWE talent coming in. We like your work Yoshi and hope things pick up for you whatever happens.

The Ugandan Giant wrestled mainly in the 80's and 90's and his gimmick was that of a head hunter. Slap that huge belly. Recently told some dirt sheets that he wasn't happy with his paydays and guys like Hogan were making millions. Kamala, you were never Hogan (but we get your point).

Was a very good wrestler, especially by old WCW standards.

He has mainly competed in smaller organizations and wrestled in WCW for awhile. Face paint was simple, but effective.

Competed in Japan for most of her career. Many fans from North America know Nakano from feuding with Alundra Blayze / Madusa in WWE and WCW.

Her face paint is fairly understated most of the time save for the crack like streaks down her face.

Nakano is understood to have given professional golfing a swing!

The man that would go on to become Kama and The Godfather. A good gimmick (geared to kids).

His voodoo gimmick of causing wrestlers to vomit and ooze oily looking stuff out of their heads was only enhanced by his skull inspired face paint.

The man credited with being the first to blow 'Asian Mist' into his opponent's face has pretty cool face paint. Almost looks like he was on the receiving end of the Asian Mist himself.

He held a series of retirement matches in 1998 and was always a very solid worker.

The Great Muta has had many different styles of face paint throughout the years.

Mostly known in North America for his stints in WCW and short time in WWE, Muta has always been a top wrestler wherever he has competed.

Changed over to wearing a mask since shaving his head. Check out Muta VS Hogan which took place in Japan about 15 years ago. Classic.

The whole gimmick of Hakushi 'tatooing' his face and body with Kanji characters was very cool. Very good worker.

Dustin Rhodes eccentric character has one of the coolest paint jobs ever. You have to love the Hollywood theme and intro, and how about the trademark promo "You will always remember the name... GOLDUST".

The Samoan Bulldozer was awesome. Umaga's face paint appeared to be an extension of his tribal tattoo art that he had across the rest of his body.

Umaga used his face paint to enhance his character and as a source of intimidation to his opponents with it resembling war paint of certain tribes.

While the colours and styles of Damien 666's paint changed throughout the years, the number 666 has always emblazoned his forehead.

Wrestling for most of his career in Mexico, Damien uses his paint as a character enhancer as well as for intimidation purposes.

If any gimmick was perfect to have face paint associated with it, the Boogeyman is it. He made a few alterations to it throughout his WWE career, but all consisted of a blood red backdrop on to which he superimposed other weird things.

His apparent eating of worms added additional intimidation factor to the whole gimmick.

Lord Tensai, a major heel (villain) in the WWE has heavy face and body tattoos and body piercings, most if not all of which are legit. A former name he wrestled under was 'Prince Albert' (look it up and draw your own conclusions). A tough and legit SOB with loads of talent. Give the hardcore fans more time and they should come around and back him up more in current WWE storylines.


So wrestling and face paint fans. There you have it.

Got a wrestling match or fancy dress party coming up? Why not contact face painting and costume specialists, Human Statue Bodyart, for more details about how you can bring your pro wrestler to life. Masks and other costumes and accessories are also available.

Thank you to the extremely talented pro wrestlers who keep entertaining the fans each week, and Sting, Jeff Hardy and friends... please keep wowing us with your artistic creations.

That's it for the wrestling and face painting unmasked news today, but stay turned for developments as the countdown towards AWF 'Australia VS The World' and WWE 'Over The Limit' continues.

*The writer is the business manager of Human Statue Bodyart, Eva Rinaldi Photography and the director of Media Man and Australian Sports Entertainment.

Australian Sports Entertainment
Posted by Media Man at 11:54 AM