Legally Blonde The Musical to open at The Star, Sydney tonight - 21st September 2012 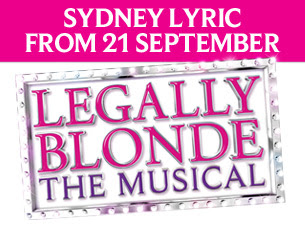 The play comes with much fanfare so it will be interesting to see if the show lives up to its reputation and hype once it plays to live audiences at the Sydney Lyric Theatre, which is part of The Star (formally known as Star City Casino).

The Star and its business partners have taken a calculated gamble on running with 'Legally Blonde', and you can bet that they will be hoping for similar outstanding results that they received with musicals such as 'Annie' (which was considerable helped along with a strong performance and some wonderful publicity from Sydney radio icon Alan Jones)

Sydney continues to secure world class entertainment thanks to our friends at The Star and Lyric, and we encourage you to check out what all the fuss is about.
Update... News Media has been notified that short segments of four musical numbers from the show will be performed, and afterwards producers Howard Panter and John Frost and lead cast members Lucy Durack (Elle Woods), Rob Mills (Warner), David Harris (Emmett), Helen Dallimore (Paulette), Erika Heynatz (Brooke Wyndham) and Cameron Daddo (Professor Callahan) will be available for interview and photographs. The musical numbers will be: Serious So Much Better Whipped Into Shape Legally Blonde Remix Based on the hit movie of the same name starring Reese Witherspoon, LEGALLY BLONDE is the award-winning London and Broadway sensation created by a top-of-their-class creative team, led by Tony Award-winning director and Olivier Award-nominated choreographer Jerry Mitchell (Hairspray). LEGALLY BLONDE ran for three triumphant years in the West End, over two years on Broadway and is currently on a major UK Tour playing to packed houses. Winner of seven major awards including the coveted Best New Musical 2011 (Olivier Awards®) this all singing, all dancing romantic comedy is about knowing who you are and showing what you’ve got! The Australian Premiere of this award-winning Broadway and West End sensation was secured for Sydney with the assistance of the NSW Government through Destination NSW and the City of Sydney.
Legally Blonde To Open Tongight...

The Sydney Lyric Theatre is going to be host to the famous musical 'Legally Blonde'.

Legally Blonde The Musical is the hilarious story of college sweetheart and homecoming queen, Elle Woods - a girl who doesn't take no for an answer. When her boyfriend dumps her for someone "serious", Elle puts down the credit card, hits the books and heads for Harvard Law School! Along the way, she proves that being true to yourself never goes out of style.

Legally Blonde The Musical - Winner of Best Musical 2011 Olivier Awards and a smash hit running into its third year on the West End was created by a world-class creative team led by Tony Award-winning director Jerry Mitchell.

Based on the movie starring Reese Witherspoon and remaining true to the script, Legally Blonde the Musical is a feel-good number with a '90s feel.

College sweetheart Elle heads off to law school to win back her boyfriend Warner after he dumps her for someone more serious, only to graduate top of her class and find a far better love interest.

Warner, too, finds the courage to dump family expectations of a career in law and politics and pursue his true calling as a model.

"I've seen it on Broadway and the West End and it's great. It really does do the movie justice," leading actress Lucy Durack says.

"I love the role of Elle. As much as she looks like she hasn't a care in the world, people are unkind to her and judge her and she struggles with that.

"But she takes a positive path and rises above it. She doesn't take the low road, ever. The whole show is a celebration - be who you are, the best version of yourself, and be proud."